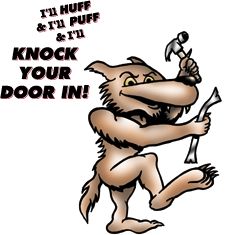 Lets get to the facts. The number one method of break-in is FORCED ENTRY. The number one method of forced entry is KICK-IN attack. The following story explains the importance of good strong, properly installed deadbolts, on all exterior doors.
The National Locksmith Testing Lab, recently did a series of comprehensive examinations on deadbolts and door knobs that not only proved informative, but also fun.
First, the stars of this article consist of the hardware used on the door that weathered our violent attacks. The surviving hardware consisted of the following:
1. The Schlage B660P series of deadbolts that have a beefier bolt assembly and stronger holding screws than that of the standard 400 and 100 series.
2. A MAG High Security Box Strike (Which states on the box that it will stop kick-ins it does and should be used with all deadbolts).
3. A Don-Jo classic wrap around door reinforcer that fits on the door under the deadbolt and door knob to stop the door from splitting - it does, too.
These three items can be seen in Photo 1. And while they appear a little abused, they did work. So well, in fact, that despite the assault the deadbolt still operated. 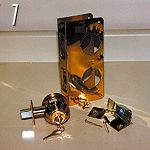 1. The Stars of the test deadbolt, Heavy Duty Strike, and door plate.

Photo 1. The Stars of the test: The Schlage B600 series deadbolt, the MAG 747 Heavy Duty Strike, and the Don-Jo door plate. The doors and framing construction used for the test were standard for residential applications. The rough frame was built to standard residential construction, except the header, which played little part in a security installation, using building grade 2x4. The doors were standard residential steel clad doors with wood rails or edges. 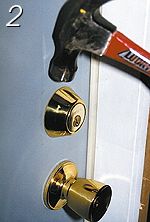 Photo 2. On the first door I installed a Faultless deadbolt and door knob purchased from a local Builders Square store. In the package the $12 deadbolt was nicely displayed and it certainly looked good, at least to the uninformed public. The photo shows the installed Faultless door knob and deadbolt. The good looks are only skin deep. The tools used in the torture test was limited to those any homeowner or burglar would have around. After only a couple of hits with the hammer, the deadbolt was moved downward exposing the inner workings The first assault was a hammer attack on the Faultless deadbolt. 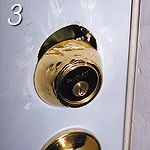 3. The first assault was a hammer attack on the Faultless deadbolt

Photo 3. At this point, the deadbolt is actually circumvented and compromised. This took about five seconds and two blows of the hammer. Photo 4., shows our thug sticking a screwdriver into the hole to pull the bolt back. 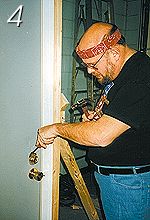 4. Only a couple of quick blows to open the deadbolt.

Despite being able to open the door rather easily and quickly, we went a little further. Photo 5. shows what happened after using the screwdriver and hammer to beat on the deadbolt a little longer. Still, it was decided not to open the door in this manner. Instead, I selected brute force, I got to kick the door open (I have always wanted to do this). Backing up a little, I leaned back and gently kicked the locked door. It literally sprung open. The strike went flying as my size 13-1/2 shoe lightly touched the deadbolt. The deadbolt strike screws functioned to help split the door frame, and that was all it took for the door to pop open 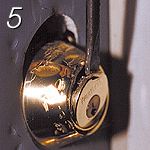 5. Next came a simple screw driver attack. The lock was easily ripped off the door. 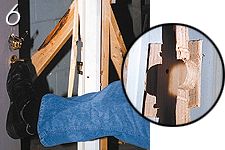 Now we proceed on to the real test, the reinforced door and strike plate. The old battered door was removed and a new one rehung. After truing the door with shim stock, it was drilled and the guard plate was installed on the door. The reinforcement plate was also installed in the jamb.
Photo 7. shows the Schlage B600 series deadbolt being installed on the door.
Photo 8. shows the MAG 747 strike installed with two cover screws and two strike screws located on the inside of the box itself.
Photo 9. All four screws are 2in length giving excellent penetration of the jamb and frame 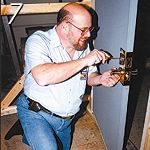 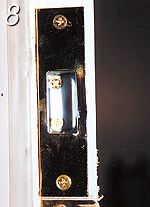 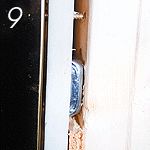 9. The four screws anchor the strike to the frame.

The Don-Jo wrap around plate was then installed along with the deadbolt and a doorknob. For the next test we locked and attacked the door knob. As expected, the knob was circumvented with a pipe wrench in about eight seconds (see Photo 10.). After twisting the doorknob open with the wrench, it was hammered off. This was adding insult to injury. Nothing was really accomplished, except to prove the non-protective feature of the average door knob during a force attack. 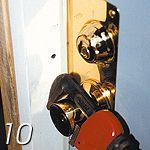 10. Using a wrench on the door knob posed little challenge. 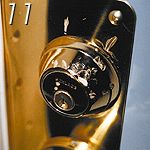 11. Battered but not defeated. Even after repeated hammer blows there is no defeat.

The real test followed. The deadbolt was beat for about two minutes with the claw hammer. The results? Despite the marring and a few indentations, there is no circumvention here as before (see Photo 11). This deadbolt is designed with a bolt cover or guard and is seated into the face bore hole, preventing the lock from being knocked out of place. Even if a small opening was made, the bolt cover does not allow access to the bolt. The Don-Jo wrap around plate added further protection by not allowing the hammer to pierce the sheet metal of the door, allowing the lock to loosen or be exposed. The Don-Jo wrap around and the Schlage B600 withstood the first in a series of assaults. 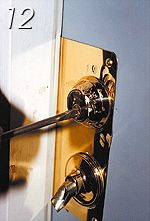 12. Trying to knock the cylinder out the back of the lock didnt work either. 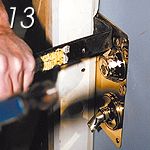 Not succeeding at knocking the lock off the door, it was then attacked with a screwdriver and hammer. This attack resulted in an unsuccessful attempt to punch the lock cylinder through the back of the lock (see Photo 12).
Photo 13 shows an attack with a pry bar. This had no effect on the security of the door, except to bend, mar, and disfigure the installation.
It was now time to again, kick the door in. The first kick was at the same force as that used earlier on the non-reinforced door with the Faultless deadbolt and knob. Despite a level 4 reading on the Richter Kick Scale, nothing happened.
The kick force was increased to a level 7.
While the door didn't move, a couple of the supports for the door broke free. Nothing like having the house come down around the door! After replacing the door supports, the door was given one last gigantic, all-out effort kick, (level 9).
Still, NO results. Not wanting to miss out on any of the self-abuse, several others in the testing lab added their own kicks, but none were so great as a 300 pound locksmith/safecracker could give.
One torture tester backed up 20 feet and rushed the door yelling, I have steel toed boots on. He jumped up and kicked the door with a Karate kick that would have crushed most any door. Nothing happened. Then he turned around and backed up 30 feet. He concentrated, focused, and like a professional athlete he approached the door at warp speed, jumped, and gave that deadbolt a double diabolical Shudo-Kahn death kick. Again, the door withstood the competent attack that a lesser prepared door would have easily acquiesced to. (see Photo 14). 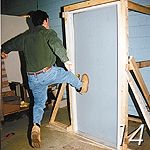 14. The kicking attack after reinforcement of the door.

Unsuccessful, a strange smile crossed this torture testers frustrated face, slightly reminiscent of the Grinch before he burgled Who Village. Vaulting to a nearby YALE forklift, he stated that it was time for the door to DIE. Not wanting to crush the wall of the Testing Lab, he decided not to ram the door, and instead placed the forklift blades up against the door, putting gradual pressure against our reinforced locking system (see Photo 15). 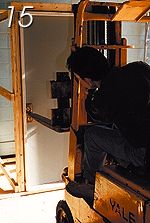 15. Man the battering rams and full speed ahead!

Once touching the door, he stepped on the gas. The wheels started turning, but the door and its hardware held. After increasing the speed, the door still did not open. At maximum speed the wheels burned through the floor tile and into the cement. (see Photo 16) Suddenly, and finally, the door crashed open. The result! The strike plate split, the frame was slightly cracked and, except for two large dents from the forklift blades, the door remained unscathed An incredible display of what some rather inexpensive additions to a deadbolt installation can do. After viewing the damage, it was evident that the eventual strike box failure was due to the extensive twisting and bowing of both the door jamb and the framework. 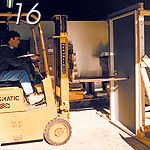 16. With wheels spinning, the door and its hardware withheld the forklift assault (not considered a UL standard). 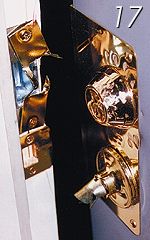 17. To think it took a forklift at full speed to open this door.

In a home, drywall and other wall components may make for an even more rigid framework, better supporting the strike, and making the entry even harder! So, while the forklift assault has not yet been added to the UL Standards Test, The National Locksmith Test Lab and demolition crew has provided you iron clad proof that you are safer when using the right equipment. These products really do work! The products used in this test are just a sampling of available products that can greatly increase door security. For more information consult with a professional locksmith in your area.